Russia: “What If” Released 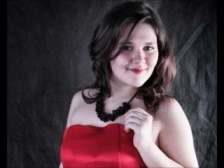 Only a few days after the announcement that the champion of “The Voice”, Dina Garipova, would be representing Russia, her song “What If” has been released.  The ballad, composed by the Swedish/Russian team of Gabriel Alares, Joakim Bjornberg and Leonid Gutkin, was broadcast on Russia’s Channel One on Sunday.

This is arguably the most simple, straightforward ballad that Russia has put forth in their seventeen years of participation at Eurovision.  It’s tough to imagine a delegation putting an ice rink, backflip, or spinning oven into this presentation.  (It’s really more of a wind-machine-and-pyro-curtain number, don’t you think?)

The moral of world peace and harmony is nothing particularly new at the ESC, but Dina offers a refreshing innocence  that lends itself well to such a simple and universal message.  That being said, just because she’s a fresh face doesn’t mean that she doesn’t have the vocal chops to handle a power-ballad like “What If”.

I am normally hesitant to make predictions, but between the strength of Dina’s performance (albeit, in-studio), the universality of the song’s message, and the fact that Ukraine, Belarus, Lithuania, and Moldova are all in this semifinal, where ten of sixteen entries will qualify, I’d be a bit shocked to see this fall at the Semifinal level.

Posted on February 25, '13, in 2013, Russia and tagged dina garipova, eurovision, russia, what if. Bookmark the permalink. 1 Comment.