← “Something Better” for Finland
The Shin feat. Mariko Ebralidze for Georgia →

“Hunter of Stars” Catches the Win in Switzerland 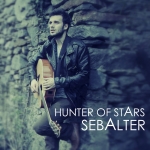 Last night in Kreuzlingen, just a stone’s throw away from the German border, Die Grosse Entscheidungsshow took place at the Bodensee Arena.  A somewhat slim field of six entrants presented their songs and performed covers, hoping to find support in the Swiss voting public and a ten-member professional jury.
After the last chord had been strummed and the last note belted, only one act could raise the trophy high.  This year, the honor goes to Sebalter and his folksy pop song, “Hunter of Stars”.

Sebalter (real name: Sebastiano Paù-Lessie) is from the canton of Ticino, in Switzerland’s Italian-speaking region.  (Incidentally, Ticino is also the home of 2012 representatives Sinplus).  He’s been a violin/fiddle player for over twenty years now, but he’s generally been performing as part of ensembles such as The Vad Vuc, as opposed to taking the lead.  He struck out on his own in 2012, but this is his first official single.  During the show, he also covered Avicii’s “Wake Me Up”, which you can hear him jamming on in-studio here.

There’s definite potential in “Hunter of Stars”.  Sebalter is charming (in that cute band-geek sort of way), and we don’t get a lot of whistling in ESC entries (at least, not since “Sing Little Birdie“).  But the song itself is borderline subtle, and his English pronunciation could use quite a fair bit of polish.  But if Sinplus could train themselves to stop saying “sweem against the strim” in the time between the Entscheidungsshow and the Big Dance, Sebastian can do the same.  With a bit of linguistic deciphering, and possibly an amped-up arrangement, this could turn into a quite pleasant three minutes on stage in Denmark.

But until then, Sebalter’s whistling will continue to remind me of this:

← “Something Better” for Finland
The Shin feat. Mariko Ebralidze for Georgia →