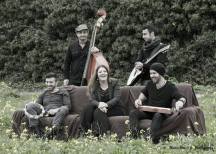 Saturday night marked the 2014 edition of Malta Eurovision Song Contest (or, as I like to call it, the “Maltathon”).  During a show that lasted nearly four hours, fourteen acts duked it out for the chance to follow Gianluca’s successful trip to Malmö, and try to match JESC champion Gaia Cauchi’s success.  After the performances and a long list of interval acts, a champion was crowned.

Despite the public’s backing of Jessika’s “Hypnotica“, the jury heavily favored folk-pop band Firelight‘s “Coming Home“, awarding them the eventual win by a significant margin.

Firelight is a moderately new band on the Maltese scene, but a deeper look into the band’s roster yields a familiar name: Richard Edwards, perennial MESC participant (and one of my picks in my “if at first you don’t succeed, try, try again” series).  Richard has come as close as runner-up (with 2011’s “Finally”), but grabs his first win in this newly-formed ensemble.  The lead female vocals are provided by Michelle Mifsud, Richard’s sister.  (Richard and Michelle’s elder brother, Wayne, came in 12th place this year with “Some Kind of Wonderful“.)

The band, made up of Richard, Michelle, Tony Polidano on bass, Matthew Ellul on guitar and Leslie Decesare on percussion.  They plan to release their first full album in the near future, with nearly all songs written and composed by Richard.

As for my view, I’ve absolutely fallen for this song, but never actually expected it to take the victory in Ta’Qali last night.  Malta, over the years, has tended towards bright, bouncy pop entries or big, Disney-esque ballads, with few forays into other genres.  This is a major departure from what we normally see from the Maltese; Firelight will be the first actual band to represent the country in their now-27 entries.  Fans who were expecting another fluffy number may be disappointed in the selection of “Coming Home”, but I prefer to look at things a bit differently.

We as Eurovision fans often crave something contemporary that will bring an air of credibility to the Contest: something beyond the schlager, sequins, and pyrotechnics that plague the stereotype.  We were thrilled to see “Euphoria” and “Satellite” cross over into the mainstream, and even those who rolled their eyes at “Igranka” had to admit that it was something that they could hypothetically see on the charts outside of the ESC.  “Coming Home” is a perfect example of the country-kissed folk-pop that has been making waves globally recently.  Mumford & Sons is the go-to example, of course, but you hear it in hits like Avicii’s “Wake Me Up“, Gary Barlow’s “Let Me Go“, and The Lumineers’ “Ho Hey“.

I’ll say it loud and clear: a similarity of style does not, repeat, NOT mean plagiarism.  The jangle of a mandolin (or, in this case, Appalachian mountain dulcimer) or a foot-stompin’ rhythm might be unfamiliar to some in the context of Eurovision.  However, just as it would be unfair to lump Anton Ewald’s “Begging“, Eric Saade’s “Popular“, and Alex Sparrow’s “Get You” together, because they all combine involved detailed choreography, catchy hooks, and impossibly-chiseled cheekbones, it’s would be just as unfair to lump all nouveau-folk songs together as plagiaristic.  Just as Paradise Oskar does not equal Tom Dice, or “Euphoria” does not equal “Glorious“, “Coming Home” is its own song.

Ok, rant over.  What do you think?  Let’s keep the conversation going!